It's the cool refreshing taste of a new week of anime episodes, and refreshing story developments as Deca-Dence pulls the rug out from under many collective feet. Gibiate's time travelling samurai join the slate, complementing Zoro's situation in One Piece as he gets into a surprisingly well animated duel with a monk over a priceless sword. Head on over to the Youtube stream if you want to see Brian and Dwayne's faces for whatever personal reason you may have! It's the choice of a new generation!

It's the biggest roster we've had for a while now as some powerful new challengers enter the arena. In the red corner we have God Of High School, the second of Crunchyroll's collaborations with Webtoon that reunites us with Garo: Vanishing Line director Sung Hoo Park who comes out swinging. In the blue corner stands Deca-Dence, an original creation from Hiroshi Seko and Yuzuru Tachikawa who also have a history with us as the writing & directing team behind Mob Psycho 100, though by the time you hear this that'll all be swept aside by the furore over its second episode. And undermining the foundations of the ring is Japan Sinks 2020, Science Saru and Masaaki Yuasa's adaptation of the earthquake disaster novel that looks to already be on shaky ground. How will they fare against our established series, and which will come out on top? In the brutal world of Let's Go there can be only one! Or about eight to ten, whatever we could fit in this week! 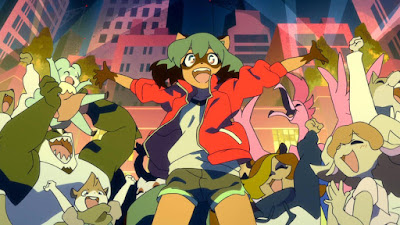 Yet more belated recordings have escaped from Brian's editing suite and rather than spam your RSS feed with multiple alerts you can get all the good stuff in one tastefully presented package right here!

Let's Go #156 was a no nonsense affair as the intellectual investigators of Woodpecker Detective's Office confronted their own mortality, Echo met the devil at the crossroads in Listeners and the Wacky TV Nanana crew were waylaid by pirates!

#157 had us questioning our own existences as the true identity of the Sohma family head was unmistakenly confirmed in Fruits Basket, while Mu may never have been a real person to begin with in Listeners. Much like Minare in Wave, Listen To Me we fervently wish to reincarnate as Scandinavians in our next life...

#158 was getting to the very back of the cupboard as both Wave, Listen To Me and Listeners played themselves out with aplomb but left us with a sizeable gap on our slate, with Tower Of God not far behind. Starvation seemed imminent, unless...

#159 came to the rescue with Extra Olympia Kyklos and One Piece returning to the air and back into our welcome embrace. Kamen Rider Zero One, Kiramager and Healin' Good Precure swept in alongside them to bring jump kicks back to your Sunday afternoon viewing.

and #160 gets us right up to date with the first new arrival for the Summer season in BNA: Brand New Animal, with which we shall exercise some restraint and savour week to week rather than cram it all in over a weekend in a vain attempt to get timely but half-baked reaction posts up on the web.

That's a lot of cartoons! And if you'd like to listen to us LIVE and without a safety net then be sure to stay subcribed to the Let's Go streaming channel, with all the gaffes and malapropisms that don't get edited out of the final cut anyways! There's even the possible threat of being to not only hear us but SEE us also. A bright and terrifying future awaits!