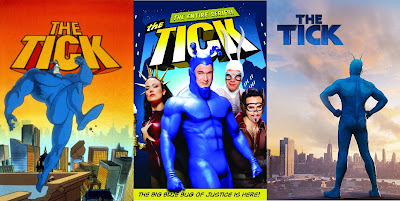 Masked avenger Brian Smith answers the clarion call of justice as the unstoppable force meets the immovable object meets the inevitable cliff edge! A Drawn Or Alive first, it's a triple header of titles all adapting comic crazy Ben Edlund's big blue maroon as he thwarts crime in animation in 1994 before becoming larger than live-action in 2001 and 2016 respectively. With Edlund himself pitching in rather than working these ideas out on the page each version could be deemed the realest deal, but what makes each Tick... tick? There's no time to waste chum, as evil is out there handcrafting mischief for the swap meet of villainy!