#1: Soothsaying With The Simpsons 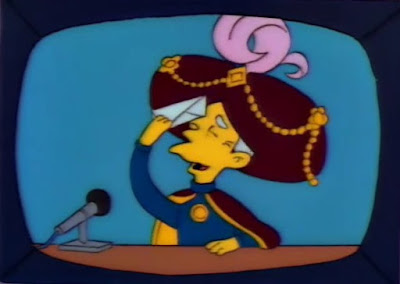 The world's most well-known cartoon comedy family have borne witness to much in their seemingly everlasting tenure on television, and within those annals are writ many a gag that then eerily manifested into our own reality some years later. From murder hornets to presidential elections to scientific wonders, could The Simpsons be a codex that predicts the fortunes of our civilisation? Or do such respected major publications as Time Magazine, Gentleman's Quarterly and that one dude you know off Twitter really gotta drum up some traffic? We'll sort the cromulent truths from the entertaining lies and peer within the Springfield scrying glass to make a few prophecies of our own as The Secret Of The Sailor Madness is preached unto the world anew!

Email ThisBlogThis!Share to TwitterShare to FacebookShare to Pinterest
Labels: predictions, presidents, The Simpsons